The day I saw the following in Tahrir Sq., my mind went immediately to the French Revolution – Madam Defage and her buddies knitting under the Guillotine as the forces of the popular Revolution cut off the heads of the aristocrats. 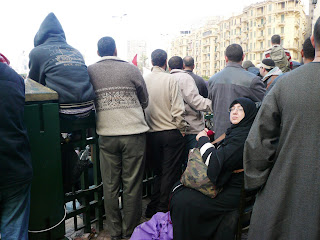 As I took the photo I wondered if the Egyptian Revolution would go the same way.  Since I cannot read arabic my understanding of what is going on here is, understandably, limited.   However, through my limited perception I do see similarities between the two revolutions.

In France what started as a revolt against the monarchy and poverty turned into a crazed “witch hunt” where citizens could denounce anyone they had a grudge against which would result in arrest and in most cases – having their heads cut off.  The problem with the human race is that we are basically all the same and everyone is familiar with the phrase “Power corrupts and ultimate power corrupts completely”.

Even the best of us – we don’t know how we would react if placed in a position of absolute power – we would like to think we would be good, honest etc. but unfortunately this is seldom the case.  All over the world career politicians and sometimes ordinary folk from the community find themselves elected to positions of governing power – only to find they have simply taken individual positions from other individuals – BUT ….. and herein lies the source of the problem – THEY HAVE TO FIT INTO THE EXISTING BUREAUCRACY.   These people – new to the job – find themselves being directed by office staff as to what they can and cannot do, given endless constraints they knew nothing about previous to election.  Before they know it they have forgotten who they are, where they came from and what they intended doing.  In time they become the same as the people they replaced and in turn are replaced themselves and so the cycle goes on.

There is a similar situation in Egypt – new government ministers have taken up posts at the head of thousands (if not millions, I don’t know the number) of people who have been in their existing positions for years.  Having been through the system myself in regard to paperwork here I can say that in my case I doubt the Minister in question ever even saw my file – my fate was decided down the line.  But all those people are still in their positions.  So I ask the questions “What can the new guys at the top really achieve?”  and “How long before they succumb to the same temptations as their predecessors?”

As in the French Revolution when the Mubaraks and the ex- Ministers etc. have been dealt with……..who is next in the firing line?  At the moment it appears that the Army/Government are appeasing the thirst for justice as voiced by the popular revolution by detaining and questioning the Mubarak family and the ex-Ministers.  (I have not forgotten there are also trials of those arrested in Tahrir etc. from the side of the revolution).  Will justice be dispensed with due process and mercy or will sacrifices be made to appease the masses?  Which begs the question “Is it the voices of the masses demanding this or is just those who can grab the microphones, shout the loudest and manipulate technology?

In the light of the above questions I wonder if the ultimate fate of the Egyptian Revolution will be that of the French Revolution?  Will there be, and are there already innocents in prison, pointed out by other individuals for their own reasons?   At the moment it seems highly likely – but I do hope they won’t go as far as having a guillotine made to speed up executions!

An overall view of daily opinion on Twitter would reveal the growing demand for punishment of everyone from Mubarak and his family down to the police in the street.  Who has the ultimate power at the moment I wonder to myself?  The Army?, the Government? or is it the Popular Voices on Twitter, Facebook etc. who are capable of drawing millions to the street?  Is it the one who shouts the loudest in the street, tweets most often, achieves the “famous” status as a blogger, activist etc. ………..who are the current power forces.   More importantly how are they and how will they use this power?  Will they use it for the people, for the country or will they succumb to the addictive power of Ego massaging?

Will the Egyptian Revolution go the way of the French Revolution or will Egypt give us a new and better system of democracy?  I hope the latter.

Did you enjoy this post?  It would be great if you could share it via the links in the following box – hope you drop by again!