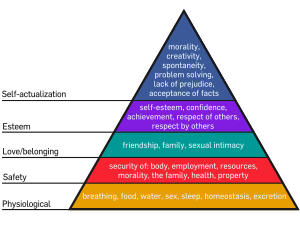 It is widely accepted that the above Hierarchy of Needs explains why most of us do what we do and when we do it.  For the first four levels everyone also agrees, I think, that we need to fulfill our needs on each level before moving up to the next level.   If you find the above technical….it is easily explained.

Imagine you, YOU (if you are to really get this you need to close your eyes and not only think about the following but really IMAGINE yourself in the following situation….ok?  Imagine you, YOU are completely naked, standing (or most likely huddled in some corner) in the street, you haven’t eaten in a week.  So you are starving, naked, homeless, dirty, alone.  What is the first thing you WANT, really, really want?  If you have really put yourself in this situation in your mind you will answer “FOOD!”  Food is the first thing you want.  What is the second thing you want?  CLOTHES, not for modesty but to protect and keep your body warm.  Next thing you want is shelter.   You HAVE to go to the toilet also (mustn’t forget that!).  The next most basic instinct we all have is for SEX!

So those guys (married, single it doesn’t matter – if the guy is married maybe he is not getting much sex from the wife!), those guys catcalling, hooting, making sexy, lewd comments to girls (and remember in Egypt sexual harassment happens to all ages and it doesn’t matter whether the females are veiled or not) are SEXUALLY FRUSTRATED at the time in their lives when their male hormones are rampant and they are in their prime!  It is like trying to keep a hungry lion in the kitchen and forbidding him to eat!  The hormones are alive and well in the ladies also and, veiled or unveiled, the art of seduction is second nature.  We all know that sex is taboo, forbidden before marriage and can cost a man or woman their lives here in Egypt if found breaking that taboo.   I have no solution for this tug of war.  We have covered the basic needs of every human being – this is First Level.

Now, since I am talking mostly about Egypt we are just going to have to let the subject of SEX hanging in mid-air and unresolved……as we move to the next level.

Second Level humans want security and safety – security of job, housing, family, good health, property ownership, security of morality (actually I think Saudi Arabia have morality police) Religions impose and police public morality.  Have you ever thought about how easy it is for people getting regular sex to tell everyone else they shouldn’t be havin’ it?!

Third level we want our own family, someone to love and be loved by (as distinct from just physical sex we talked about on the first level)  So, here in Egypt sexual frustration is apparent in the sexual harassment.  For those lucky enough to have the other basic needs of the first two levels supplied ie food, shelter, family, work and good health, their most pressing need is to GET MARRIED thereby taking care of both the sexual problem from the first level and addressing the needs of the third level for love, family, children, own home.  Now here’s the next biggest problem.  The guy has got to provide the apt. or house, half the furniture, the dowry and convince the lady’s family that he can financially provide. These are the obstacles he has to overcome in order to satisfy his remaining level 1 need (sex) and his Level 3 needs.

Fourth level on the pyramid is Self-Esteem and to be held in respect and esteem by others, confidence, creativity and a sense of achievement.

And so on and so forth anyone who thinks they are above this level can just go look up the rest of the pyramid yourselves as I am going on to answer the questions I asked in the beginning.

Why is there a sexual harassment problem in Egyp?
Sexual frustration – level 1 need not met
Why revolution and civil unrest?
1.  In Egypt the first phase was instigated by Level 4 people -young, middle-class, educated, frustrated in their opportunities for self-expression, creativity, travel, culturally imprisoned by a police state.  As their protest (which initially was not as big as portrayed) was newsworthy they received MASSIVE world coverage in a time when nothing much was happening elsewhere in the world and TV ratings rocketed!  TV and media people are mostly level 4 and upwards.
2.  Wael Ghonim cried on TV and out came the Level 2 people.
3.  Then when the ball was well in motion came those struggling between levels 1 and 2.  However this group was mainly driven by economic needs as opposed to political.  These levels are usually too busy surviving and making a living to be interested in politics.
Why do some people protest in the streets and other people don’t?  Depends on where they are in the pyramid and if the believe protesting will deliver their needs or how high the frustration level is.  Who leads the protest? Again level 4.
Why do some people want to work and other people don’t?
People who don’t want to work are content to stay on level 1 or 2 if their needs are being met by someone else.  People who want to work are striving to get to the next level.
Why do some people commit crime and other people don’t?
Here we would have to define crime and the different levels and different motivations (another day perhaps)  Most crime is motivated by necessity or greed then the desire for sex, control and power (2 most powerful aphrodisiacs and quite a lot of the time intertwined).
Why do some people have ideas and other people don’t?  Depends on what level they are on – and how badly they want to move up.  “Necessity is the mother of invention.”
What is the role of Government in any country?
It should be to provide conditions to enable citizens to move up the levels.
When does a country become ungovernable?
When too many people on too many levels are frustrated to the point of civil and public disobedience.
Where does the economy fit into all the above?
Obviously if the economy is in bad shape the people on the first 3 levels are screwed!
Level 4 probably run around the streets screaming in frustration.
Those above level 4 sit can sit it out!
Current big problem I see in Egypt is that the Level 4 people have/had NO conception or understanding whatsoever about those on Level 1.  They have no comprehension what the worsening economy was doing to those in the levels below their own level – mostly because they were born into level 4 as opposed to having to provide for themselves!  Therefore they believe their demand for freedom is man’s most basic need.  Whereas food is man’s most basic need.  So to obtain all their demands they were willing to sacrifice the economy in pursuit of freedom of expression.  I do agree there was a need for freedom from police brutality.  But this perceived injustice did not seriously rally them until one of their own social class was killed.
How can a government know the right moves?
By knowing what percentage of their population is at each level would be the start of answering that question!!
Addressing the needs of the biggest and most frustrated group would be next.
Keeping a continuous eye on what the economy is doing to the various levels and taking protective, corrective measures to keep it possible for the different levels to progress would be the ideal end result!

Catering too much to the wrong level……not a good idea whether it is the top or the bottom level.  Right now they are trying to cater to the demands of Level 4 as they are the most vocal level, and as I said this level is not in a position where they need to be worried about the economy – just yet!

A great thing Mara House has in it’s favor in a post COVID world is it’s size.  It’s a small, private hotel without public access.  The size of your suite means you can spend your entire in-house time here without contact with any other guests, if you so choose.