11 March 2015 – This is David’s second day in Egypt and I thought it only right he should get inside at least one Egyptian Temple without wasting any more time.  We headed to Karnak Temple – a temple which I must admit did not mean much to me until today.

Schwaller de Lubicz said that the best way to visit Egypt’s temples is with a relaxed and open mind like a child just looking a pictures.  That does not mean it is not a good idea to take a guide with one, but it is a good idea to see them with a guide who is prepared to give you only as much info as you need.   I think Schwaller believed that the stone carvings contain ‘activation keys’ for anyone seeking to understand the secrets of the Universe and the meaning of life.

Quick Visit to the Souq

Anyhow, just as with everything else in Egypt, things have a way of organising themselves and the best thing to do is just go with the flow.  I wanted some incense for Mara House so on the way to Karnak Temple we got our calesh (horse and carriage) driver to stop off at the Egyptian Souk and paid a visit to Sheikh Al Arab’s intriguing, old world eastern spice shop.  What was intended to be a flying visit to buy some frankincense turned into a most entertaining and interesting hour of watching him prepare potion after potion for his customers.  This guy is amazing, he has a cure for everything and I am going to do a separate post on him later.

Not wanting to come across as ‘Little Miss Know-It-All’  I told David to feel free to tell me shut up at anytime as I only wished to give him as much info as he wanted and not to just dump ALL my personal opinions on top of him!  I need not have worried about that.  I started off explaining how the temple floor could be seen to rise while at the same time the roof could be seen to dip if you stand at the entrance of the temple.  It was so the rays of the setting sun could shine directly through the temple into the Holy of Holies.  Once in the Holy of Holies David pointed out to me that the rising sun hit the Holy of Holies from the opposite direction every morning – something I had not thought about before and is not evident in other temples where that room normally has only one entrance.  That was how the rest of the visit went.  I gave one piece of information and David came up with observations which were completely logical and new to me.  A fair exchange 🙂 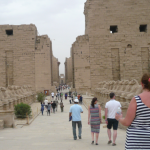 It seemed that Karnak Temple opened many doors to us this day and we sauntered towards the exit to find Amr from Mara House pacing anxiously up and down outside the railing – once he saw us he started pointing frantically to his watch.  It was 4.30 and we were an hour late!  We has spent three and a half hours in Karnak Temple and it only seemed like one hour!  It was lovely to see Ahmed (our Manager at Mara House) and Amr so intent on making things flow smoothly for us.  They were so worried because we were missing out on our fellucca sailing time.  We decided to let Luxor Temple for another day and just go on the sailing trip with the guys.  They had brought along sandwich rolls with tuna, fresh strawberries, crisps and biscuits – not to mention the beer – Egyptian Stella beer is really, really good!

We spent the rest of the afternoon until sunset on the Nile and it was soooooo peaceful.  Really I have been missing Egypt so much and I did not realise it.  We had a great staff meeting and got up to date with lots of stuff.  I was surprised and delighted at the new ideas the guys were giving me.  Things are really moving along here in Luxor now.  There is a new governor, much work has been completed on roads etc and the sun shines 365 days a year – who could want for anything more?

I think I have died and gone to Heaven 🙂

Tags: Karnak Temple, Luxor Egypt, Souk, What to do in Luxor

My site contains affiliate links to some products on Amazon, for which I may receive a small commission (at no extra cost to you) if you click through and buy.  I only recommend products I use and liked myself.