My mother used to say that nobody except myself would ask people for what he/she wanted at the wrong time – but somewhere else I got the belief that “if you don’t ask, you don’t get, so what have you got to lose by asking?” With that thought in mind I  headed off to see the new Governor of Luxor the night after I came back from Cairo.
Egypt has a serious DIRT and RUBBISH problem.  As I have now become the “Good News Bunny” once again believing that anything is possible.   I decided to tackle this problem in my own street.  On my adventure to see the Governor I first had to promise those officials between the street and the Governor’s door that really, really I had no problem – almost rumbled when his assistant caught me powering up my notepad in the waiting room because I didn’t want to keep the Governor waiting while I prepared my ‘evidence’. In Egypt nobody wants to tell the “Big Boss ANYTHING that might upset or anger him and I suspect something similar went on with Mubarak.
The following video was my problem.  The dirty, the filth, the household garbage plus at least 2 inches of sand and dust underfoot in parts of MY street.  It had been dirty before I left but on my return from a month in Cairo no amount of positive thinking or trying not to look at the problem was possible.  I was also tired of explaining to my guests that this was Egyptian life in Luxor!  The air turned into a dust tornado every time a car or motorcycle passed through, covering everywhere inside and outside in a new layer of dust a hundred times a day……
The Governor had a top army officer with him at the time.  Both were extremely understanding and sympathetic to the fact that I had a tourist house in the middle of this filthy street.
Within minutes the Governor had picked up the phone and given the order for my street to be cleaned.  Three hours later the Manager in Charge of Sanitation, Ahmed Tarek (in the dark glasses) arrived to inspect the problem and one hour later a little truck and six men with big brushes arrived. 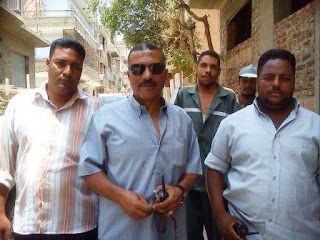 They cleaned the immediate vicinity to Mara House then conceded that a loader, bigger truck and a few days of brushing and removing, brushing and removing the dirt and rubbish would be required. Ahmed Tarek was true to his word and so, day after day for 5 days some men with brushes swept the dust and sand into heaps along the street and later on came the truck with 6 – 7 men and picked it all up.  A loader also came to take away two bigger heaps of sand and rubble. 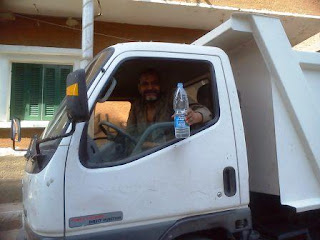 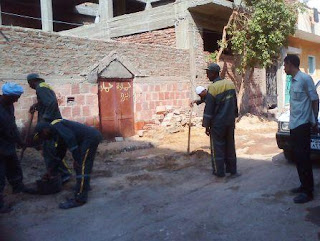 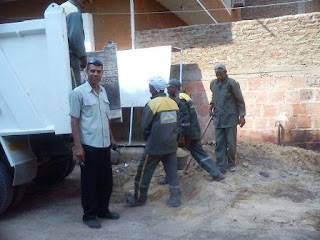 The street, in it’s cleanliness (comparative to previous!!) is sooooo amazing.  My neighbours were delighted (even though many had contributed to the former state of it!  All went well …… each day a little bit more of the original road tarmac became visible. 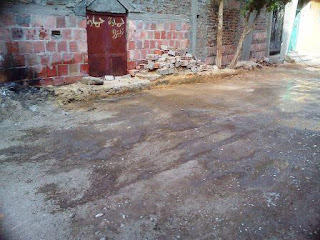 Then came a bombshell.….as another load of sand and blocks were delivered up the road.  Within a few hours the blocks and sand had all been transferred up to the top of the house which was having another floor added……but, once again the red dust from the bricks and the remains of the sand was left on the street to be showered into the air and spread about the street by every passing car. 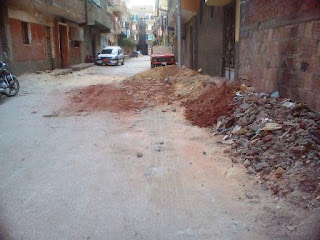 That was the breaking point for the men who were collecting the piles of dust, dirt, rubble and sand that was swept up and waiting for them every day – They flatly refused to take away the last remaining BIG heap of sand and rubble (photo above) left in the street.  I can understand their anger.  They suggested I go tell the owner of the house to go pay for a truck and men himself to clear away his rubbish.  They said if he is rich enough to build that big house he is rich enough to clean up after himself!  I have to say I agree with them.
Egyptians here actually take no ownership of their streets or neighbourhoods – we certainly don’t have Residents Associations or Committees.  It is common practice to dump their rubbish outside their doors and sweep/wash their houses out into the street then just leave it outside their doors.  The authorities and street cleaners get angry and fed up with this behaviour and so some streets, like mine are just left to rot!  What had accumulated in my street was not only builders rubbish, sand etc. but also disintegrated household rubbish.  We may have had a political revolution here but what we really need is mental re-evolution!
I quietly (unusual for me in circumstances like this!!) informed the Council men that I was running a tourist business in this street and the rubbish problem was between the Governor, the cleaning managers and the people in the street creating the problem.  Their solution was to leave the rubbish and go tell their manager that evening that HE should go talk to the house owner! 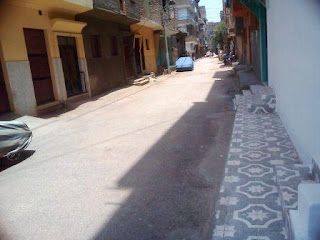 Imagine if I could walk out my door every day and see the street like this – absolute heaven!  This may seem a bit ‘over the top’ to any European etc.reading this because clean streets are normal for you and something you have come to take for granted, so look at my video again and count your blessings!  It would be so easy to have a nice street – if everyone cleaned outside their own doors (can you hear the wishful thinking??)  I will update this blog on the fate of the final load of rubbish and in the meantime I will live in HOPE of an “Egyptian Awakening” to the health and beauty aspects of cleanliness and in taking as much pride in the street outside their doors as they do inside their houses! 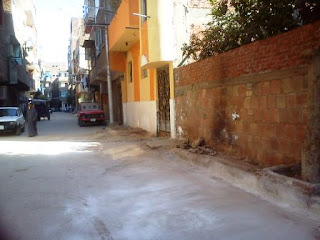 UPDATE 28 June 2011  That pile of sand and rubble that the council workers said they would talk to their boss about – it’s gone!  And they finished painting the house…miracle complete on Salah El Deen Al Auby St!