It is Friday the 18th – By the way President Mubarak stepped down on the 11th Feb, which reads 11022011 – it is a palindrome (meaning you can read it backwards as well as forwards).  So, now 8 days since the historic event and I haven’t written any blog of note since then because to tell the truth there is nothing to write about.  I know you are still seeing Egypt on TV and reading about it in the newspapers – but you are only getting reporters’ and “political analyists” opinions.

One of the stations I have been watching is Press TV – an English language television network that carries news, analysis, documentary, talk shows and sports news worldwide with special focus on West Asia, Central Asia, and the Middle East. It is owned by the Islamic Republic of Iran Broadcasting (IRIB). …(it’s a good idea to try to find out who owns the news channels you one is watching!)  Knowing who owns PRESS TV accounts for much I have been listening to.

Al Jazeera is a television network headquartered in Doha, Qatar. … another channel I have been watching (BBC and CNN are the other two but they are not paying us much attention any more!  In fact as I write BBC is showing yesterdays Cairo filming while a commentator is talking about Bahrain)

Al -jazeera is a very interesting channel.  On the 17th (I think – the days tend to run into one another now!) showed a documentary someone had apparently been making with the 6th April revolutionary movement in the run up to and during the Days of Rage i.e 25th Jan 2011.  From it we learn how Ahmed Maher had been trained by some polish revolutionaries via internet chats on how to organise a revolution…..

In a further interview with the Mellissa Block of NPR we learn that “The protests that brought about the downfall of Egyptian President Hosni Mubarak were by no means spontaneous. They were weeks, months, even years in the making, says Ahmed Maher, a 30-year-old civil engineer who helped organize the April 6th Youth Movement as well as the demonstrations that toppled the Mubarak regime.” more……

In another interview he says that what happened took him by surprise, as series of fortunate events so to speak  “Maher said. “We simply wanted to say to people that a day that commemorates the police is a total joke, and to draw people’s attention to the issues of joblessness and poverty.”  more.   I wouldn’t be surprised if we hear much more from Ahmed Maher in his own good time!

The facts as they stand at the moment are:

1. Some people from the protests in Tahrir Sq. are in talks with the Military who are currently ruling the country.  We have not been told who they are except that one of them is Wael Ghonim the google guy who started the “We are all Khaled Said” facebook page and one rep. of the Muslim Brotherhood.

2.  The guys (would-be Presidents) who are very upset that that they have not been included in the talks are Ayman Nour of the Ghad Party and El Baradei.

3.  The Muslim Brotherhood are being REALLY smart – they are not fielding a candidate in the next Presidential Election – good move – I wouldn’t want to be the next President of Egypt either!  The population will be expecting him to deliver heaven on earth to them and realistically speaking….he is not going to be able to deliver diddly squat!  So, smart move, guys, you will be ready for the following one and the dust will have settled….

4.  No statements are being released except to say the negotiations are ongoing and a committee is working on the Constitution and I believe Tuesday is the deadline for this – fair dues to them – they must be way ahead of the Irish – I remember the rewording of some parts of our constitution took months and months of writing, re-writing and debating all over the county.  Well, this committee has 10 days to come up with the goods or Ahmed Maher will have Tahrir Sq. full again – he says.

5.  It appears that there is at least one split in the youth movement.  Wael Ghonim appears to have a habit of saying unpopular things at the wrong moment so he is being a bit side-lined, whereas Ahmed Maher seems to be more adept at crowd and emotional manipulation.  See more here  The army has said that negotiations are becoming difficult are their is no longer once voice to deal with in the negotiations.

6. The general population is doing what they can to show they mean well – everyone has been out scrubbing, cleaning and clearing the streets.  It is wonderful in one way and a bit pathetic in another sense that the best they can do at the moment is clean the streets – they are directionless and leaderless and lack the facilities for coming together in a meaninful way to discuss concrete ideas and plans for themselves and for Egypt – their “idea people” should be coming out of the woodwork now or we will just have a nation of followers again instead of leaders.

7.  The older generation here for the most part, or those interview on TV at least, seem to be beating their breasts in sorrow that they let the country come to this and that this huge task had to be undertaken by their children.  Maybe, maybe not – I am rather amazed at a whole country seemingly handing over responsibility for their future and their country to their children – they may be well-meaning and well-educated children but if experience of life counts for nothing why don’t we all just either retire at 30 or commit mass suicide…….I had lots of good intentions in my late teens and indeed my 20’s but I knew very little about life or indeed the complexity of the human condition, and I am afraid my compassion for others was more of the “I know better than you and why don’t you pull yourself together and get off your backside etc.” type of pity than the true compassion and understand I am capable of today.  Age has a value that should not be discounted.  Youthful enthusiasm works well when tempered with mature experience. 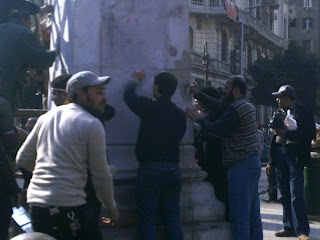 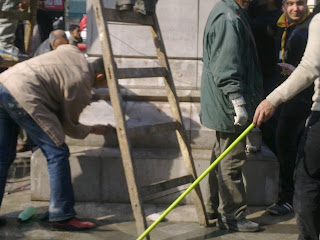 Oh yes, Iran is throwing it’s own spanner in the works….just asked Egypt for permission to send two warships through the Suez Canal….opportunism at it’s best…..another little thorn in the side of the US.

I went to Tahrir this morning – only people with official identity cards or passports were being allowed in – this time by the army not civilians from the protest group.  It was all very jolly and friendly.  But what it came down to was thousands of people coming to square and then leaving the square because there is actually nothing going on there.  A  stage was being set up but when I asked what it was for I was told “for music tonight”  !!!!  ????  The other outstanding aspect of this Days of Rage etc. – it must be the most photographed event in history.  Every day, every where in Cairo cameras and mobile phones are clicking – definitely not to place to go un-noticed now – the army could have made a fortune if they only charge 1 LE for every tank photo taken and I am sure the flag sellers are making a tidy profit also! 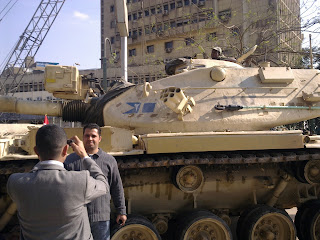 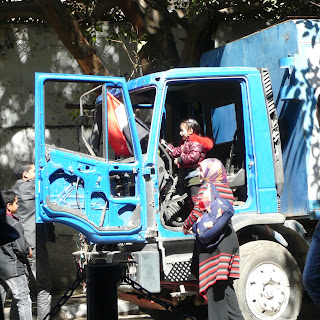 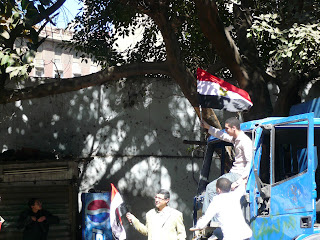 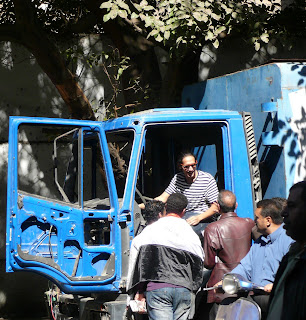 I would have thought that by now someone from some party or faction would be ready to stand up and give us their next move…..disappointing but nothing more than I expected to be honest.  As I have said before it was easy to find a scapegoat in their President for all their ills, but nobody seems to have had any idea of what to do post-Mubarak and after a week their best offer is….PARTY!!!!!

In the meantime I am wasting away from boredom in Cairo. I yearn for the days when I was so tired from answering emails re. accommodation, tours etc. that I was falling asleep at the computer (one night I was so tired I made a typo ….instead of typing “I look forward to having you here”  I typed “I look forward to shaving you here”….oh for the good old days of exhaustion!  We, humans are never happy are we!

It is extremely frustrating – but at least in Cairo I can go out and see for myself the “nothing” that is happening.  UK and some European countries have lifted their travel alert on Luxor and downgraded Cairo but the US and Australia are lagging behind.  With the travel alert in operation would-be travelers cannot get insurance – though AXA is worth a try online.  I keep asking myself “what can I do?” and “Is there something I am not seeing?” in an attempt to get some spiritual guidance on the situation…..actually it’s spiritual guidance  I should be asking for the powers that be rather than myself – the ones pulling the strings!  I am sure some people somewhere are benefiting from Egypt’s loss (not to mention mine!) 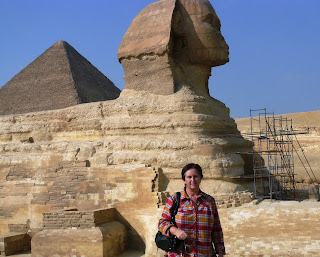 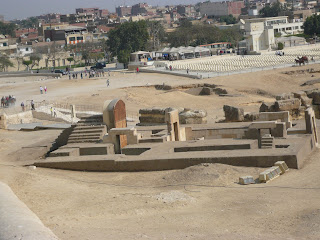 So, that’s it – Egypt is partying, economy is at a standstill, the adventurous tourists are making a slow return – this is Egypt and I expect it will go on like this for the next few months if not year.  I have been to the Pyramids and had a trip around Islamic and Coptic Cairo, explored all the shops and streets in Downtown Cairo, went to the ZOO (that one was closed)….gotta think of something to do tomorrow…..accommodation or tour enquires for Luxor or Cairo will be ecstatically received! 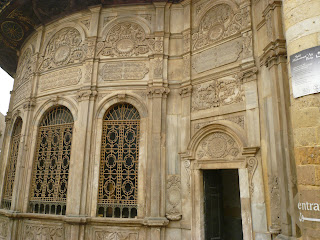 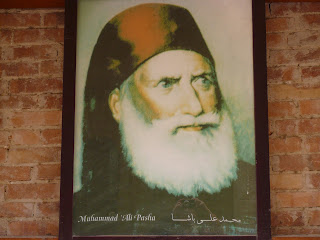 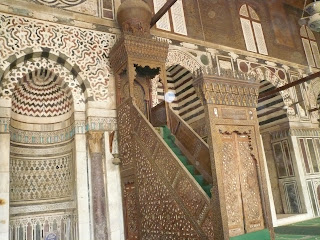