My taxi driver, Mahmoud – brought me the news this morning of a BIG party to be held at Luxor Temple to encourage tourists to come back to Luxor.  His second piece of news was that Egypt Air had given a reduced rate of 150LE for return flights Cairo Luxor Cairo for the day!!  Thinking this was part of the badly advertised African Film Festival currently on in Luxor I decided to go see what the excitement was about……well it turned out to be the “gravy train” of presidential hopeful and (ex??) TV presenter – Tawfik Okasha.This is where I need to clearly state that I am relating the following events as I saw/heard/understood them and am open to contradiction or clarity from my readers on any part of this.There was a group of riot police and lots of police officers lined up beside the temple who took their leave shortly after I arrived – the officers stayed across the street. 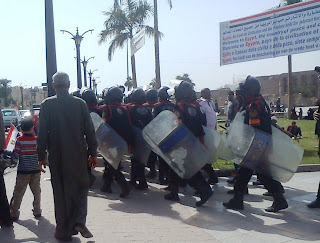 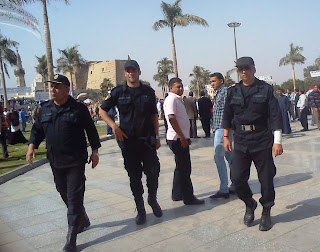 So, I didn’t see this Okasha guy but only heard him periodically over the loudspeakers and every time he spoke, part of the crowd waved their shoes in the air.  Asking Egyptians around me what the story was, I gathered that the people waving the shoes didn’t want him (why?  I could not gather at this stage). 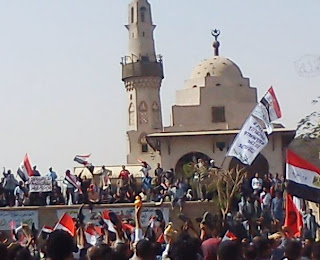 Suddenly one of the staff, Islam grabbed my hand and pulled me sideways out of the path of a crowd of men who had arrived waving sticks in the air – not particularly menacing, all of them were smiling and laughing but seemed to be rather purposeful in their march.  Then there was a rush of people from the front of the temple towards the road followed by the men.  Nobody was hurt.  Once again I asked everyone I recognized as being a ‘Luxorite” what the story was……the answer this time was the people waving the flags and the people with sticks and everyone else left in the square were from Luxor and wanted tourists back – those people chased to the street (about 30) were not from Luxor and did not want tourists back ??????

Next bit of excitement was in front of Snack Time – this time I was told that Al Jazeera Film Crew were on the top floor of Snack Time filming and the people wanted them to go……….????  Don’t think this was the case – I think it was a bit of a stand off between the two groups.  Eventually some people decided that in the interest of freedom everyone should be free to say what they wanted and called the “Luxorites” back to the music area in front of the temple.

I then met up with my guide, Mohamed who clarified ALL for me – apparently Tawfiq and his followers are going from town to town (probably part of the campaign) but the people gathered at Luxor Temple just thought it was a party to encourage tourists and as whispers go around in a crowd they were told the other people didn’t want tourists – when in fact the other people turned out to be the 6th April revolutionary group wanting to educate the people as to who Tawfik was – a “hand kisser” of Safwat Al Sherif, (founder member of the NDP, speaker of the Shoura Council – not sure if he is still in prison or not) and to try and prevent him speaking.

Whatever!   The upshot of it is that neither Tawfik Okasha, his entourage nor the 6th April people are from Luxor and their work today has not done Luxor any good – so I personally wish they had stayed away!  The “Luxorites” who gathered at the temple wanted to be part of whatever initiative they thought was taking place to encourage tourists back – most of whom by now, I think couldn’t care less who is in power.  They just know that they have been suffering from lack of work and lack of money for over a year now and want to do something about it!  Anyway it was the unsuspecting people of Luxor who got caught in the middle and ‘used’ in this fiasco today.  Happy to say that up to when I left there had been no casualties anyway 🙂

One thing that was very clear today – Luxor People want their tourists back and are willing to partake in any events to improve the situation!

A by-note to April 6th – next time you want to show someone up – just come with BIG photos and sit quietly – then maybe people will see and understand what you are saying – shouting and fighting – everyone has had enough of it.